Día de los Muertos, or Day of the Dead, actually takes place over two days, November 1st and 2nd. This tradition originated several thousand years ago from pre-Hispanic cultures in Mexico who believed that the dead were still members of the community and should be kept alive, both in memory and spirit. During Día de los Muertos, it was believed that the dead temporarily returned to Earth. Even tough the theme is death, it is not about mourning or grief, instead, it is an opportunity to express love and respect for deceased family members and to celebrate them being part of our lives even if they are no longer with us physically. 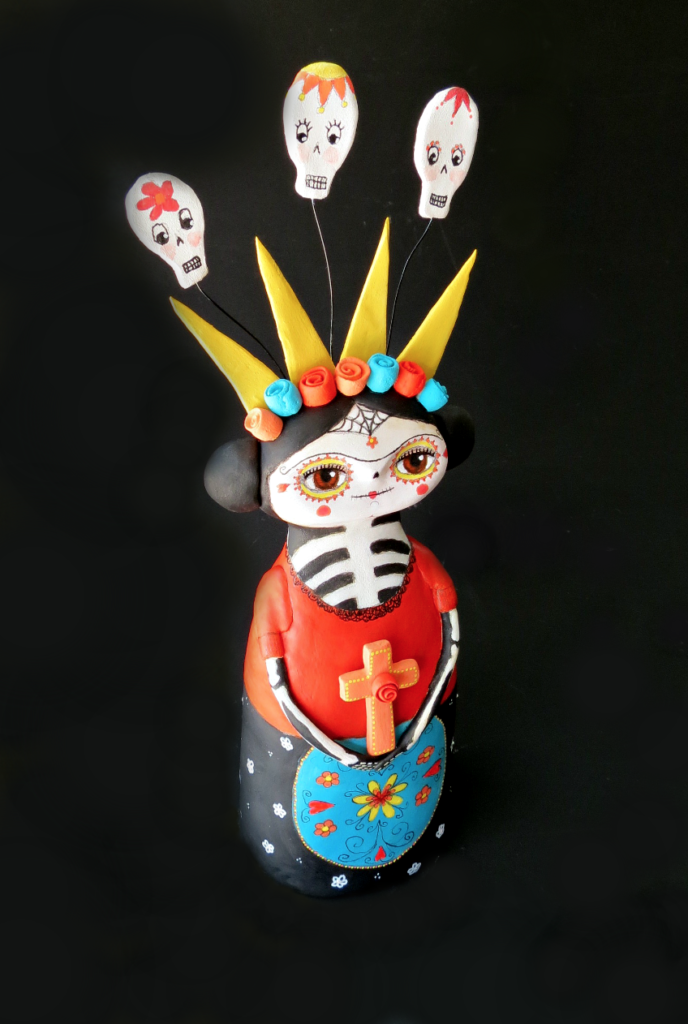 The most popular symbol of Dia de los Muertos is by far the skull or “calavera” in Spanish. This is interpreted as beautifully decorated sugar skulls and elaborately painted faces and skeleton costumes. But it is also used to refer to poems, or literary calaveras, that are written especially for the Day of the Dead. These poems are playful and humorous, rather than gloomy and mournful, and are found in local newspapers, as well as, being read aloud on television and radio programs. Their purpose is to remind people of the ephemeral nature of life and that, at least sometimes, death should be taken lightly and with a good dose of fun! 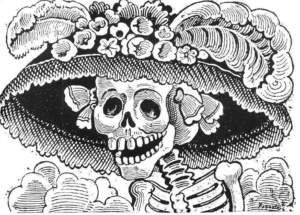 “Todos somos calaveras,” or “we are all skeletons.” is a phrase commonly attributed to José Guadalupe Posada, a Mexican political cartoonist and lithographer who in the early 20th century created an etching to accompany a calavera poem. In one of his murals, famous artist Diego Rivera, husband to Frida Kahlo, included a stylised skeleton, similar to Posada’s. 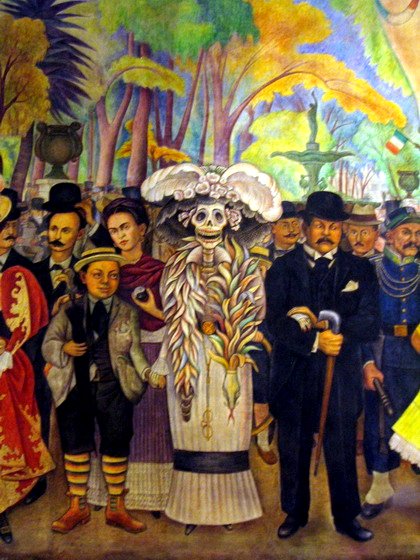 Detail of Dream of a Sunday Afternoon in the Alameda Central, Diego Rivera, 1947 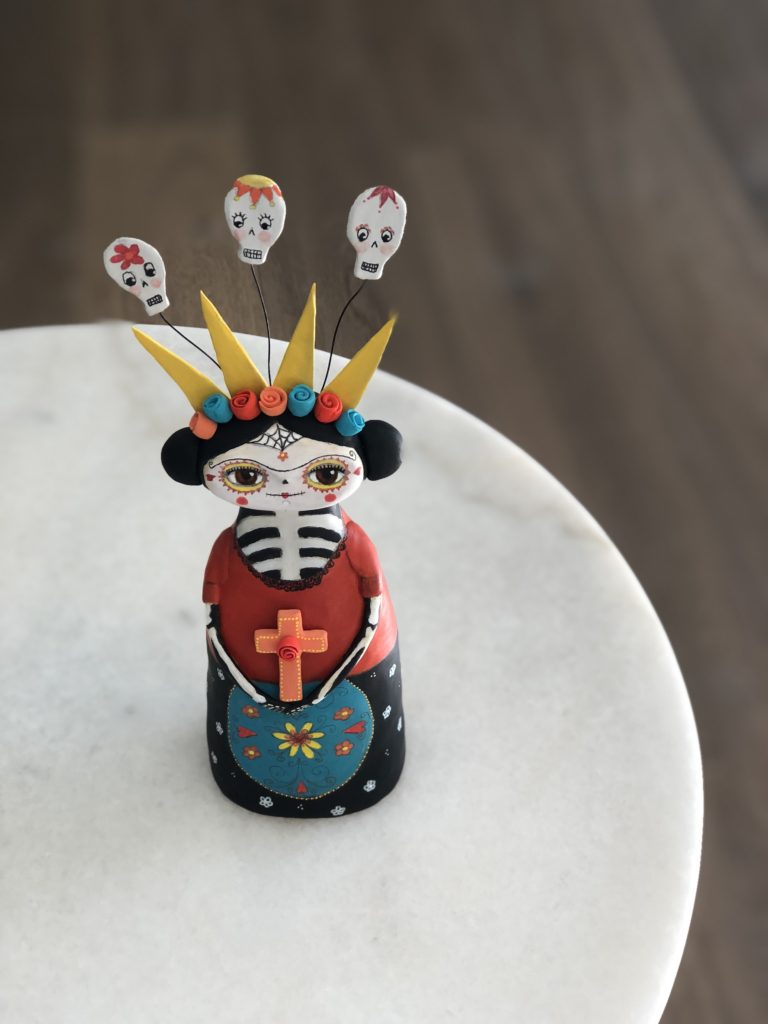 I created Frida Catrina with much love and respect for this wonderful and meaningful tradition. One of my dreams is to visit Mexico and see this holiday in action; and of course visit Frida Kahlo’s Blue House. I used bright, bold, happy colours as well as black, to catch the essence of the Day of the Dead, a celebration of both life and death. As well as her beautifully decorated face I also included some friendly skulls, a cross and, of course, flowers and hearts! 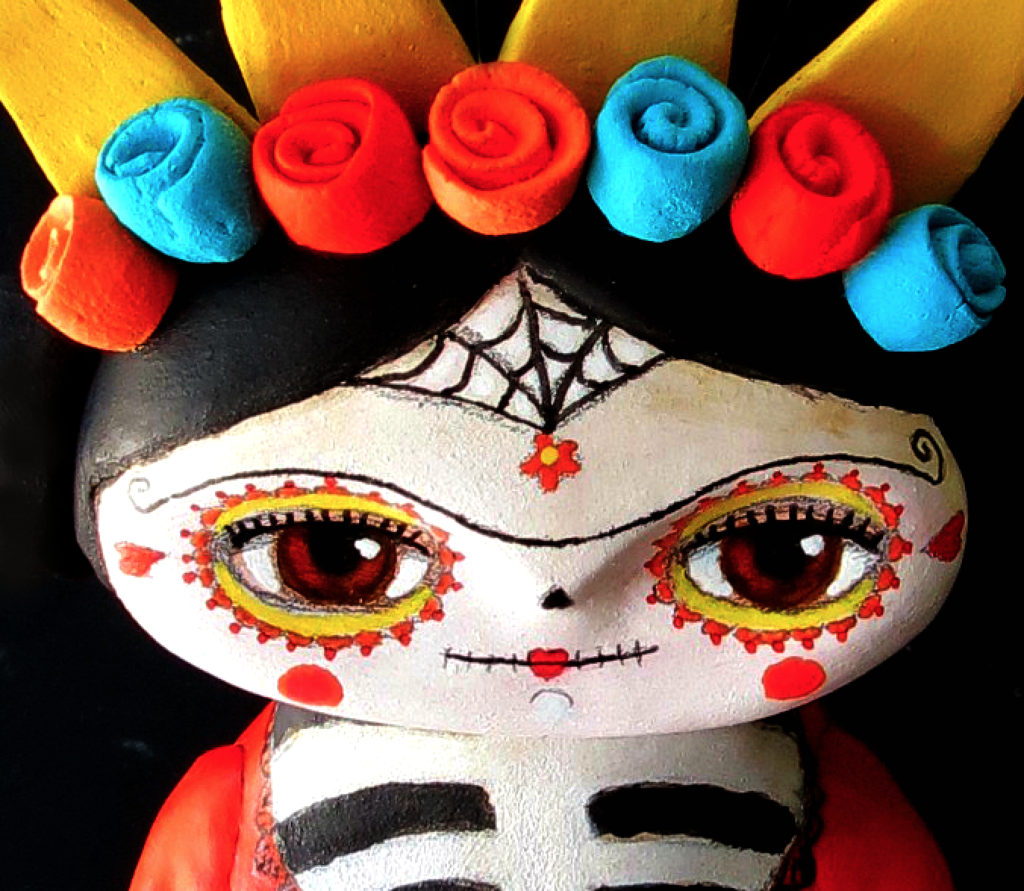 In 2008, UNESCO added the holiday to its list of Intangible Cultural Heritage of Humanity recognising its cultural importance. Nowadays, it is widely celebrated not only in Mexico but across the world. And although it might be true that most attention is given to the dressing up part, there is so much to gain from the symbolism and the meaning behind this ancient tradition. Not only as a celebration of love for those we once knew and a reminder of what made them special, what they loved and why we loved them, and still do, but also as a celebration of our lives, now, in this moment of time, even in the inevitability of death. Celebration, appreciation and respect for the circle of life which we are all part of, no exception.

For death is no more than a turning of us over from time to eternity.

I love you Mum, forever.