Hello again everyone. I had another post planned for today but, instead, I want to introduce Amazonia which I created this past week. The Amazon fires have upset, worried and angered me and Amazonia has kind of helped me process and express some of these feelings in a creative way at least.

I’m trying to make sense of what is happening. It’s not the first time there have been fires in the Amazon, and although termed ‘wild fires’ they are not natural events but are mainly caused by of a combination of droughts and human activities like deforestation. What is particularly worrying with these fires is that there is an eighty five per cent increase in the number of fires this year compared to the same period last year. Unfortunately, it has been pointed out by many that the current government in Brazil appears to be very pro land development hence the delayed attempts to control the fires and the initial lack of media coverage. Ugh, money, exploitation and politics, the usual suspects. 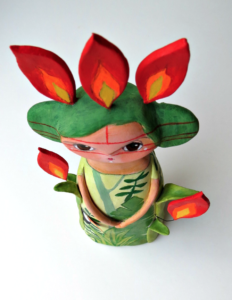 We all know that the Amazonian rainforest has unparalleled biodiversity. It is the largest collection of living plants and animal species in the world. It’s often referred to as the earth’s lungs since it produces twenty percent of our planet’s oxygen via plant photosynthesis. The process of photosynthesis also means that billions of tonnes of carbon dioxide are absorbed every year, slowing the pace of global warming. What’s happening now with the fires is that the carbon dioxide is being spewed back into the atmosphere worsening the already alarming progress of global warming.  The rainforest is also home to about one million indigenous people divided into some four hundred tribes. 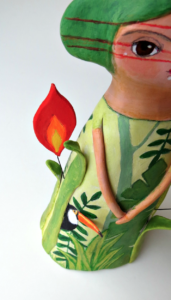 I have painted Amazonia in many shades of green to represent the rainforest flora. The iconic toucan symbolises the fauna. The toucan is said to have the loudest call of all the animals in the rainforest. Hopefully, its desperate cry for help has been heard. The markings on her face symbolise the indigenous tribes standing their ground to save their home and one of our planet’s ecosystem treasures.

Amazonia’s message is clear and simple, “I no breathe, you no breathe”. 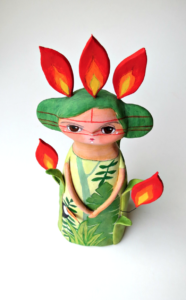 I always try to convey positive messages with my art dolls. I am finding it extremely difficult to share a positive one today. To be honest, I am overwhelmed with feelings of helplessness. To maintain a symbolic glimpse of hope I am declaring Amazonia as a work in progress. When the fires are brought under control and some order comes out of this chaos I will paint the flames green and transform them into leaves. Then she will be finished.

#EarthAlliance, launched in July by Leonardo DiCaprio, Laurene Powell Jobs, and Brian Sheth, has formed an emergency Amazon Forest Fund with a commitment of $5 million dollars to focus critical resources for indigenous communities and other local partners working to protect the life-sustaining biodiversity of the Amazon against the surge of fires currently burning across the region. One hundred percent of any donation will go to partners who are working on the ground to protect the Amazon.

💙Hello my lovelies, I hope you are all well! Th

❤️✨What can I say? Lady Gaga simply took my