Welcome Talitha and H A P P Y  B I R T H D A Y Joan Miró! I kind of worked backwards to make Talitha. I wanted to add a new doll design to the Little Dolls of Art collection (see collection here) which is inspired by other artists’ work. I usually ‘know’ which artist I want to be inspired by, but this time I wanted it to be a bit more random. So why not pick an artist based on their birth date? Why not pick an artist with a birthday in April? 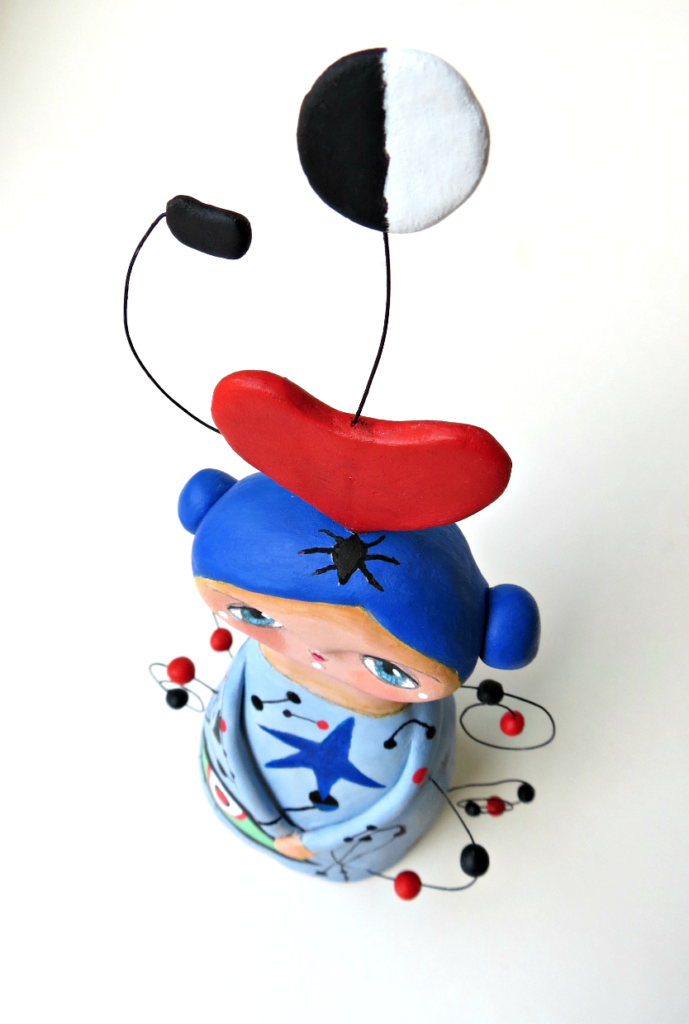 Miró wasn’t one of those artists that I was particularly attached to or knew a lot about. And I must admit that if you had asked me a week ago who my favourite artists are, Miró would not have been on the list. Even though I’ve been lucky enough to see many of his paintings in museums, I don’t remember ever saving “that moment”, for example, like when I saw Van Gogh’s Sunflowers at The National Gallery or Monet’s Water Lilies at the MOMA or Renoir’s Luncheon of the Boating Party at the Phillips Collection or Klimt’s The Kiss at the Belvedere Museum, to name but a few, a very few!

But, I was excited to start researching about his life and work and I am so happy that I did! I looked at some of his paintings more carefully and read the stories behind them. I was especially excited when I noticed that he used the eyes and stars as symbols in some of his paintings. A lot of those paintings were part of his Constellations series. Although, apparently simple, you can tell that the symbolism and thought process and expression of ideas or concerns or emotions is, for myself at least, even more important than the finished painting. 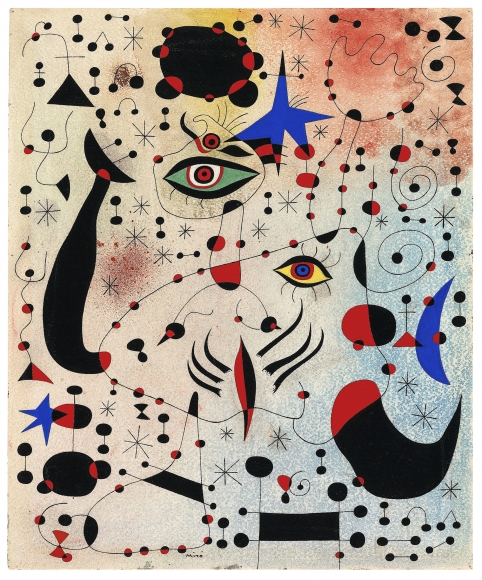 Ciphers and Constellations, in Love with a Woman, 1941

In this series especially, we can observe different shapes overlapping in different ways. His use of lots of intersecting black lines remind us of astral maps and representations of cosmic space. The backgrounds are painted in soft tones but the details are in primary colours.

I love this description for the Constellation series as given by the Metropolitan Museum of Art, New York:

…the entire sheet of paper is covered with hourglass shapes and a multitude of forms suggesting stars, eyes, circles, triangles, and crescents that are linked by thin black lines to evoke a fantastical wrought-iron screen or perhaps a magical constellation in the cosmos. 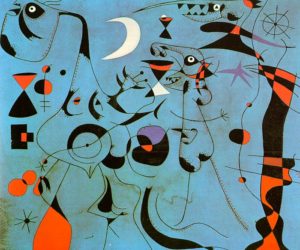 Figure at Night Guided by the Phosphorescent Tracks of Snails, 1940

The spectacle of the sky overwhelms me. I'm overwhelmed when I see, in an immense sky, the crescent of the moon, or the sun. There, in my pictures, tiny forms in huge empty spaces. Empty spaces, empty horizons, empty plains - everything which is bare has always greatly impressed me.

I loved this anecdote that I saw in a short exhibition film about his life by Tate (2011) where Pepe Pinya (gallerist and close friend) shares one of his conversations with Miró regarding his prolific art making and hard work:

Pepe Pinya: I was a bit afraid that he got tired and I said, ‘Joan, don’t you get tired with so much work?’ And he took my arm and said, ‘No, no, no, Pepe. I have to work now because when I’ll be old I won’t be able to work.’

On that day it was Miró’s 80th birthday! How inspiring!

In the final decades of his life, Miró further advanced his work in different media, including hundreds of ceramics, for example, the Wall of the Moon and the Wall of the Sun at the UNESCO building in Paris. And it was in the last years of his life that Miró wrote some of his most radical and least known ideas, where he wanted to explore the possibilities of gas sculpture and four-dimensional painting! I think he was a fine example of the idiom «Γηράσκω αεί διδασκόμενος» in Greek or «I grow old, ever learning». 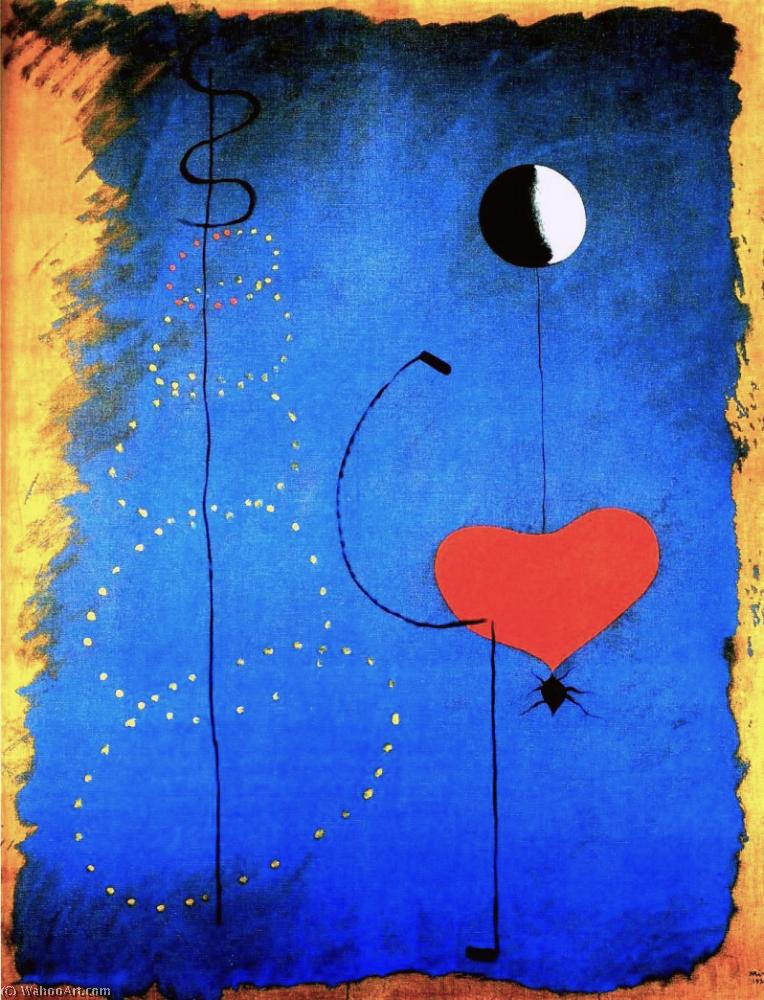 And so Talitha came about. I really wanted to represent the symbols and the black intersecting lines used in the Constellation paintings and wanted to extend them out of her body into the negative space around her. But to mix things up a bit, I included the heart and moon from his painting Dancer (1925)!

And the name Talitha, you may, or may not, ask? Well since she was inspired mostly by Miro’s series Constellations I wanted to give her a name that would have some relevance to the night skies. Talitha is one of the common names for Iota Ursae Majoris, a yellow and purple star system in the constellation Ursa. Ursa Major, or the Great Bear, is one of the best known and loved constellations of the northern hemisphere! I wonder if Miró ever gazed at it. 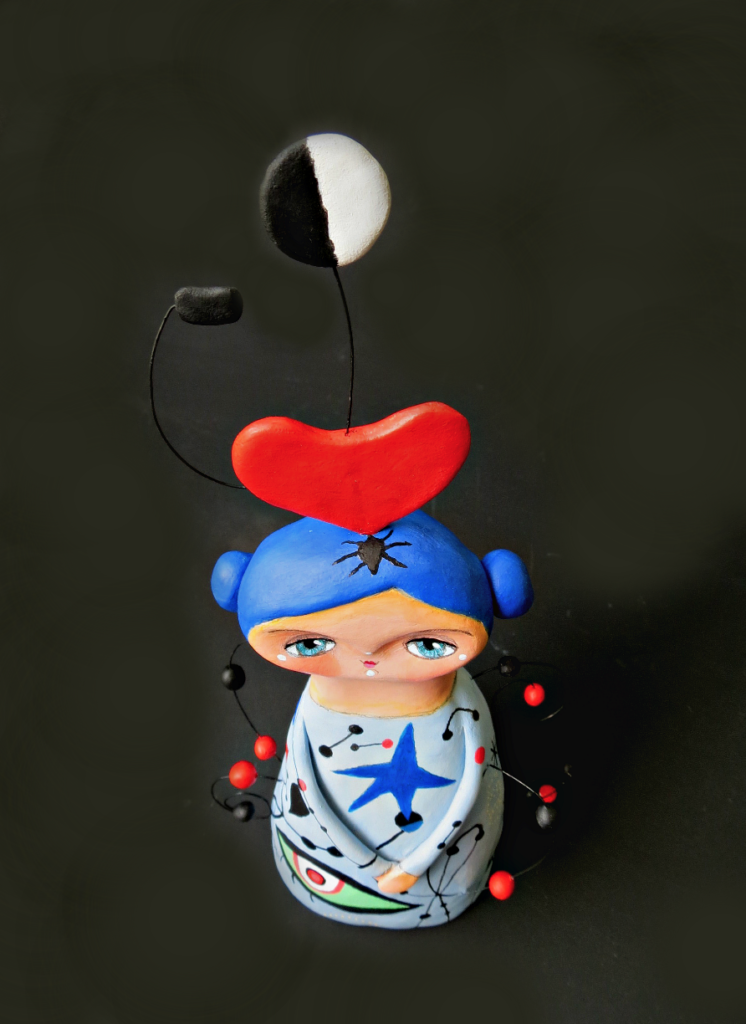 And to finish with the words of one of the greatest cosmologists:

Look up at the stars and not down at your feet. Try to make sense of what you see, and wonder about what makes the universe exist. Be curious.